“My son Sebastian and I constructed our days. We would carve each day… leaving behind us a trail of days like a gallery of sculpture. Until suddenly, last summer.”

It’s not quite as tender as Night of the Iguana (my personal favorite of Tennessee Williams film adaptations), as sensual as Cat on a Hot Tin Roof (a very close second), or as powerful as A Streetcar Named Desire. Suddenly, Last Summer nevertheless is unforgettable and as steamy as a greenhouse–if only for Katherine Hepburn’s mezmerizing, tour de force portrayal of her character, the nervous and disturbed, slightly-off Violet Venable.

Venable is a wealthy New Orleans woman hiding a web of conflicted feelings and secrets. She brings houseflies (“flown in at great expense”) for her glass-encased Venus Flytrap in her ornate, “Dawn of Creation” conservatory, much like the “flies” (of a human variety) she once attracted for her departed son, Sebastian. Venable blames her son’s cousin, Catherine Holly (Taylor), for Sebastian’s death and, consequently, wants Catherine to pay the price by having a lobotomy. Catherine, even though the handsome Montgomery Clift (Dr. Cukrowicz) would perform the procedure, is understandably a bit reluctant. (“Cut the truth out of my brain… is that what you want Aunt Vi ? Well you can’t. Not even God can change the truth”) 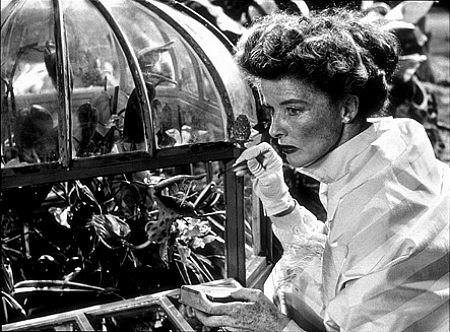 Clift’s acting, in contrast to Taylor’s, is a little on the bland side. But Liz more than makes up for it. Taylor, it goes without saying, is very beautiful in every one of her scenes. She might overact, but this is Tennessee Williams after all–over the top performances are expected and welcome, as are the typical moments of family quarrels and backbiting, and depictions of struggles with sexual identity.

As an example of a character whose every appearance will prompt hissing, look no further than Mercedes McCambridge’s portrayal of the very grating and unlikable Mrs. Grace Holly. The overwrought ending of Suddenly, Last Summer seems out of place given the tone up to that point, and is this movie’s only big drawback. But what comes before is well worth the price. Like the other T.W. films I mentioned, this one’s never dull–a movie for a group of friends to enjoy on a hot, July night, with a Mint Julep or two.

p.s. One thing to keep in mind during when the movie visits a very Snake Pit-like insane asylum is that the story is set in 1937. Things have improved a lot since then. At least one hopes they have.

“Oh, Sebastian, what a lovely summer it’s been. Just the two of us. Sebastian and Violet. Violet and Sebastian. Just the way it’s always going to be. Oh, we are lucky, my darling, to have one another and need no one else ever.”