Is it Live or Memorex? A Night with Barbra Streisand

Recently, I did something I never thought I would get to do: See Barbra Streisand in person, in concert. In her whole 50-year career, she has performed in concert less than one hundred times. From 1969 until the mid-80s she never performed in public due to stage fright. When she did come back, the concerts were such major events that the chance to get tickets was impossible or insanely expensive. But this last month, I decided it was probably going to be my last chance to see her as she turned 70 this year. Plus, I had a little extra cash to spend the obscene amount of money needed to buy a ticket.

It was an important to me to go as well. Streisand was one of, if not the biggest, influences in my teenage years. As a meek and weak child of the 70s, who often would get picked on for being too skinny, not good at sports, a ama’s boy, so to speak, Streisand stood for the outcast who made good. The girl who they called ugly on the school yard who ended up dating handsome movie stars, who could tell everyone you can’t stop me, I’m going to do it. And then there was her voice, which is incomparable, loud, brash with a “fuck you, world, I’m going to hold this note 20 seconds because I can” attitude. There is a whole orchestra of emotions in her voice.

Before the instant world of immediate entertainment gratification, each new album I got of hers was an event. Every Christmas, my parents or sister would get me another album. And I would put my headphones on and listen to it over and over until I had squeezed every ounce of emotion out of it, until the timbre of her voice was rumbling around in my head like some wind that wouldn’t stop howling. When things got bad in high school as I suffered through bullying, I would get through the day by remembering every note of her albums.

So, needless to say, 35 years later, there are many shades of emotion for me when it comes to her. Going to this concert was a form of closure, homecoming, and remembrance. I honestly didn’t know how I was going to react. Would I breakdown, recalling that her voice probably pulled me through those dark years, kept me alive, gave me hope? I would actually be in the same room with this person for whom I used to seek out the latest photos, thinking that seeing the newest photo brought me that much closer to being in her immediate reality. I know, that’s nuts…

Through Facebook, I’ve reconnected with a few high school friends. One friend was also a huge Streisand fan and we connected back then through our fanship. He wrote on my wall the day I was going:

“Tonight when the house lights dim and the music starts, sit back, relax, clear your mind and enjoy every frickin’ moment. Something you’ve thought about your whole life is about to happen. I’m so excited for you. Enjoy, enjoy, enjoy.”

So what happened: I had a really nice time. No catharsis, no moment where I said, “Wow… this is the moment I had been waiting for all my life.” It was just a great concert. I thought long and hard afterwards…

What happened? I’ve been to concerts where the singers took me out of myself, wrapped me in the songs and music: Peggy Lee comes to mind; seeing Keely Smith; Frank Sinatra at the Chicago Theatre, sitting in the front row of the balcony, feeling like I was watching something historic that was fading away; Rod McKuen, whose simple performance and words brought me to tears.

The difference? The ‘stadium show experience.’ I don’t know if it would have been different if I had paid $500 to sit in the front section, but in the $300 seats, she was just a little woman, a football field away from me.   However, on both sides of her were two projection screens with multi-camera views of the concert. It was a concert that seemed to be produced with the intention that it would be sold for television.

At one point, I turned to my friend Ben who was sitting next to me and said, “ I’ve 3 letters to describe this concert…P.B.S.” Barbra sang, then introduced some guests, who sang with her then did a few songs on their own. The guests were middle of the spectrum genres: Il Volo, three very young tenors who would be at home on any summer night at Ravinia; Chris Botti, a talented trumpeter;  and her son, Jason Gould. I could feel the places where the pledge breaks would naturally fit. The one surprise was how effortlessly she chatted with her guests and addressed the audience in some carefully written ad libs. However, that just reinforced the feeling of a variety show. I have to admit that when she first came out, I did feel a rush to see her and I got a little teary eyed during “Didn’t We?” but as the show went on, I less frequently looked at the stage but just looked at the giant projection screens. 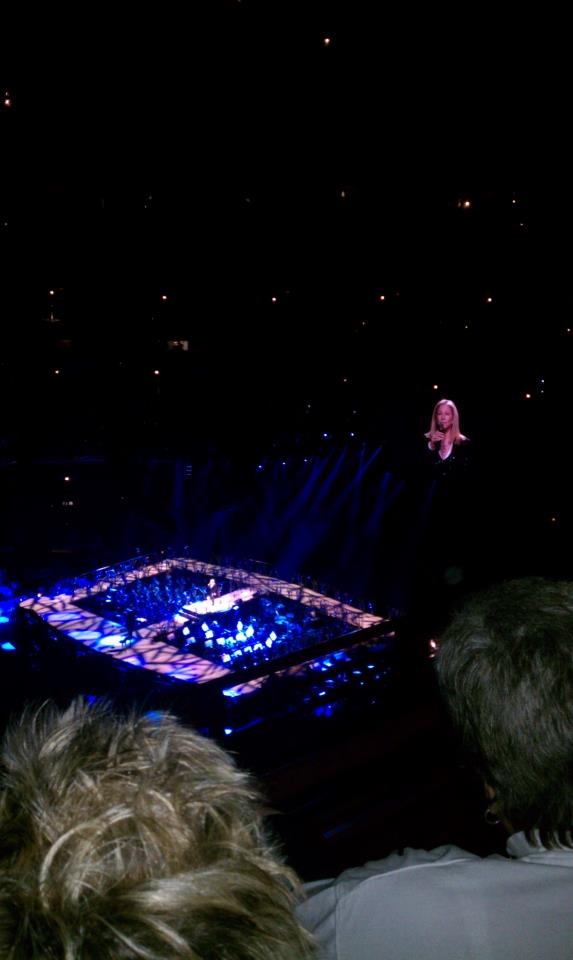 Mega-Streisand comes out of the dark at the United Center

It has to be twenty years since I’ve been to one of those giant shows before the show was shown on the giant screens. (I think the last time, believe it or not, was RUSH, where I don’t think I ever even saw the band, but just the laser beams shooting over my head.) I realized that this concert was less about Streisand on stage and more about 20,000 people all having a group televised projection experience. It was live, it was happening at that moment, but it was also on television. Why look at the stage when what you really needed to see was up on the screens?

Last year, Streisand did a private concert at the Vanguard in New York, where she had last performed in 1963. Only one hundred people were able to get tickets. The Clintons, Donna Karen, Sarah Jessica Parker, and the likes were in attendance. A few months after the show, the concert was released on BluRay. I bought it and decided to watch it by myself one Friday. I ordered in dinner, got a bottle of wine and settled in to watch it on my big projection system. The clarity of the image and the quality of the sound turned my living room into the Vanguard. It was as if I was there, front row. I wept and felt that this was an amazing performer, the one who touched me when I was 14 sitting in my parent’s basement.

Regardless, I’m glad I had the experience of seeing one of the greatest singers in history. Check that off my bucket list. Now I just need to figure out how to see Connie Francis…

Thanks to Ben Alba and Aitor Mendoza for the photos.