From Print to Screen: WUTHERING HEIGHTS

Its theme: deny the heart at your peril. 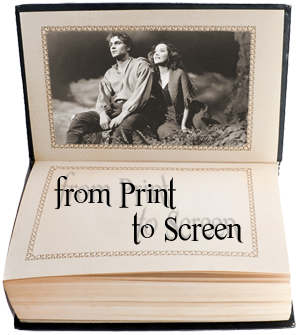 It plays like an operatic tragedy. This is the story:

Cathy and Heathcliff have known since childhood that they are soul companions. However, at around age twenty Cathy decides to marry Edgar Linton. He is wealthy, handsome, intelligent, and kind, and he is smitten with her. She believes she can marry Edgar and continue to love Heathcliff. Really.

Ellen, a young woman who is both family servant and friend, subjects Cathy to a “catechism of love.” Cathy breaks down and admits that the marriage would be a mistake.

Cathy dies shortly after giving birth to her and Edgar’s daughter. Edgar’s sister, Isabella, goes after Heathcliff in the long tradition of nice girls throwing themselves at bad boys.  He detests her. One of the first things he does is hang her pet dog from the garden gate (Ellen cuts the dog down before it dies).

Isabella wises up fast, flees from him, gives birth to their son, and dies a few years later. Heathcliff, embittered by the great unresolved passion in his life, becomes a monster. He is abusive to his son and cruel to Cathy’s daughter. He is tormented by memories of Cathy and visions of her ghost. Eventually he stops eating and dies.

Passionate, brutal, and darkly mystical—those are some words for Brontë’s novel. It has a fourth quality not always associated with the first three: it is very smart. Emily Brontë obviously was the sort of person who could walk into a room and see straight through everyone in it. She did not keep quiet about what she saw.

William Wyler’s WUTHERING HEIGHTS, with Laurence Oliver and Merle Oberon, is the distilled, purified essence of Brontë’s novel: romantic and beautiful even in tragedy. It has a happy ending that Wyler disowned.

Merle Oberon’s Cathy is passionate. However, it is impossible to imagine her getting into such a rage that her ears turn red, or ripping open a pillow with her teeth—though Brontë’s Cathy does both those things. Olivier’s Heathcliff is angry and tormented, but he is not a monster.

Never are viewers given cause to go out of sympathy with this pair.

The movie leaves out the children. Inconvenient children are often omitted in the translation from print to screen. (For example, GONE WITH THE WIND’s Scarlett O’Hara has three children in the book, but only one in the movie.) However, this omission removes a point Brontë thought important: how unresolved passion blights not only the present but the future (shades of CLOUD ATLAS there).

While browsing the WUTHERING HEIGHTS YouTube clips, I noticed that removing the dialogue punches up the movie’s power. Without words, it becomes more fiery, more like its source material.

Here is a video set to “My Immortal”:

Lindsay Edmunds blogs about robots, writing, life in southwestern Pennsylvania, and sometimes books and movies at Writer’s Rest. She is the author of a novel about love in the age of artificial intelligence: Cel & Anna.