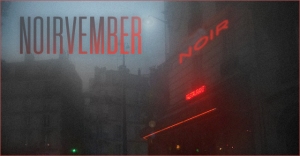 WHEN I WAS A KID, I remember watching the likes of Rebecca (1945), Mildred Pierce (1945), and The Asphalt Jungle (1950) on television. I didn’t know I was watching something called film noir, but these mysterious, riveting movies were standard broadcast fare on weekend afternoons. How lucky to grow up with movies like those to watch on rainy Saturdays. I pity the kids who have only the likes of Sponge Bob at their disposal to learn how very bad things can happen.

My top picks for Noirvember include movies that have left indelible images in my brain:

I Am a Fugitive from a Chain Gang (1932) Technically pre-noir because of its 1932 date, this film is grueling. Just thinking of it exhausts me. Paul Muni is wrongfully committed of a crime and suffers the painful consequences of harsh prison life again and again and again. Director Mervyn LeRoy creates a film experience that is raw, violent, depressing, and bleak…and absolutely brilliant.

Shadow of a Doubt (1943) One of my favorite of Hitchcock’s (and one of his own favorite’s as well), this film brings evil intent right into safe family life in a sleepy, small town. Someone you know and trust can hurt you. Teresa Wright is excited when her Uncle Charlie comes to visit but soon becomes suspicious of him. Joseph Cotten is chilling as Uncle Charlie.

Queen Bee (1955) She rules. Joan Crawford is a blast in this sinister portrayal of the perfectly evil bitch. This is a winner of a movie to watch with friends and howl at Joan’s over-the-top performance. And what a wardrobe she has!

Sweet Smell of Success (1957) Creepy and sleazy dynamics rage between Burt Lancaster, as a very powerful newspaper columnist, and Tony Curtis, the dirty public relations guy. Like so many noirs, location takes a meaningful role in the action. In this story, New York City and its bars and clubs also star.

Gun Crazy (1950) The original title was “Deadly Is the Female,” so guess who is the bad apple in this one? Annie Starr (played by Peggy Cummins) is a liar and maniuplator…and yes, she’s gun crazy in her Bonnie Parker outlaw beret. Her man, hapless Bart Tare (John Dall) is no angel, quite smitten with his guns himself, but he’s way too willing to get under her spell. You want to shake him most of the time as their crime story road trip unfolds.

Niagara (1953) This one of those Technicolor noirs, a story of a dysfunctional marriage, betrayal, and murder…with the rush of Niagara Falls as the relentless backdrop. Marilyn Monroe and her lover need to get rid of the disturbed husband, Joseph Cotten. Jean Peters is the innocent counterpart to Monroe’s juiciness. Such action and suspense!!

I Want to Live! (1958) I can’t help but love movie titles with exclamation points! Director Robert Wise takes on a true story of a murder trial gone bad. Susan Hayward gives the performance of a lifetime as Barbara Graham, a defiant party girl who, along with the rest of the world, can’t imagine that a woman would get the death penalty. Bring out the tissues.

1. Funniest Noir Title: Noir titles are not known for the humor, but the title The Amazing Dr. Clitterhouse (1938) cracks me up.

2. Gasp-Worthy Trailers: I nominate the trailer for Roger Corman’s Teenage Doll (1957) as one of the creepiest and compelling.

3. Perfect Pairing: There is no other film genre that has its own grape: Pinot Noir. Such a perfectly dark wine when you’re ready for dark cinema.

Gloria Bowman is a writer, storyteller, blogger, movie lover, freelance editor,
and author of the novel, Human Slices.
Access her blog at www.gloriabowman.com; on Twitter @GloriaBow.