Sensitive to Questions Quiz #26: “I wonder what subtle form of manslaughter is next on the program?” 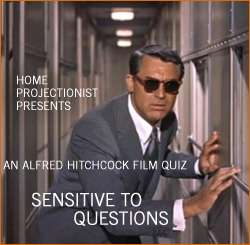 Good evening. If you’re contemplating a trip to the movies tonight, we highly recommend a picture that’s just opening. This recommendation comes, if for no other reason, because of it’s ingenious and intriguing, one-word surname title. The film concerns a famous, portly director (played by Anthony Hopkins), whose big, glossy technicolor hit, NORTH BY NORTHWEST, was followed by “a new and altogether different motion picture excitement!”. And that famous movie is the subject of the following quiz.

Good luck, Mr. Thornhill, wherever you are…

(*The quiz title was inspired by Alfred Hitchcock’s North By Northwest: “Something wrong with your eyes?” “Yes”, says the sunglass-clad Roger O. Thornhill (Cary Grant), “They’re sensitive to questions”. Later, confronting Vandamm, Leonard and Eve at an auction house, Roger inquires of them, “I wonder what subtle form of manslaughter is next on the program?”.)