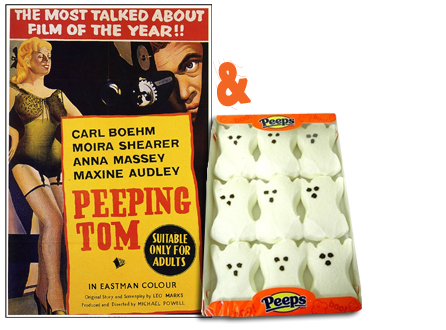 Is a marshmallow Peep really a Peep if it’s in the form of a ghost? Controversy abounds! So did it, too, with the release of this film in 1959, Michael Powell’s PEEPING TOM. The knives were already out for director Powell, for whom British film critics had no great love to begin with. This despite Powell having previously made THE RED SHOES and BLACK NARCISSUS–both of which have withstood the test of time as artistic masterpieces. Today, however, opinions about PEEPING TOM rank nearly as highly as they do for those two classics.

The story concerns Mark (Boehm), a pleasant but slightly “off” young photographer. Mark, unfortunately, carries with him the legacy of the bizarre experiments his father performed upon him. As a result of those parental abuses, Mark nowadays practices his photography in a most unusual way. Not satisfied with shooting normal portraitures, Mark photographs female subjects who are in the throes of death–deaths Mark causes, murders that Mark himself commits, camera in hand. The fact that it is clear he cannot control his compulsive behavior does soften the disturbing aspects of this movie. Nevertheless it is a dark portrayal. But it’s also truly terrifying, very scary, and, like the shower scene in PSYCHO, contains unforgettable imagery–such as the faces of one or two of Mark’s victims bearing a likeness to the faces on that box of PEEPS.