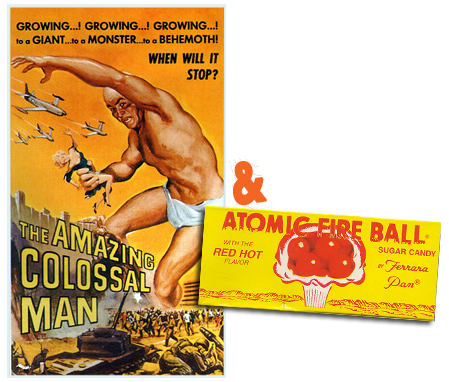 Lt. Col. Glenn Manning’s amazing adventure begins at an A-bomb testing site, and ends near Las Vegas. Like the characters in a more recent film set in Vegas, THE HANGOVER, Glenn also wakes up with a big head. But in Lt. Manning’s case, it’s literally a big head… and arms, legs and… well, we will stop there. During a noble attempt at a rescue, Glenn is exposed directly to the full force of an atomic blast. The good news is that he survives. The bad news is that he’ll need some really colossal socks, among other items, as he is now growing upwards to an eventual height of 60 feet, barefooted. This does not sit well with Glenn (played by Glenn Langan). He becomes irritable and acts out, evidenced by such behavior as impaling a soldier with a giant hypodermic needle and vandalizing the Golden Slipper Casino. Making sure that what’s happening in Vegas stays in Vegas, the U.S. Army takes its customary, 1950s sci-fi movie measures: pulverization via banks of artillery. Not surprisingly, we recommend enjoying this ridiculous but fun film with a box of Atomic Fire Balls. If it’s too much “red hot flavor”, just remember: you might grow… to like them.