Streaming Surprises #6 – Girls on the Beach

Posted by Johnny C on September 25, 2012
Posted in: Netflix Streaming. Leave a comment 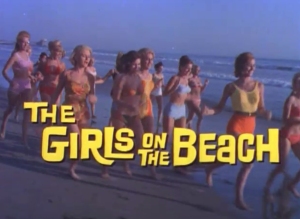 1965 was a pivotal year for music. The British Invasion had just hit, the cultural revolution was right around the corner, and the country was still reeling from its loss of innocence with the assassination of JFK.

Floating on top of all of this was a new genre of film, Beach Pictures.  THE GIRLS ON THE BEACH is Paramount’s feeble attempt at competing with the far superior American International entries that were being made at this time.   Without the benefit of big stars, this movie relies on the musical talents of The Beach Boys, Leslie Gore and The Crickets, who seem to only know one song, an Americanized version of La Bamba.

Lesson learned:  You can see The Beach Boys for free but you have to pay $5 to see The Beatles.

Leslie sings “Leave Me Alone”  and everyone does…

The plot is interesting as a time capsule.  A sorority house needs $10,000 because their house-mother took the treasure to pay for poor people’s medical bills.  The girls all band together and plan to get the money back by entering contests and planning a big show at the local hangout and changing $5 to get in!  Meanwhile some nasty boys want to get to third base with the girls so they tell them they are best friends with celebrities. 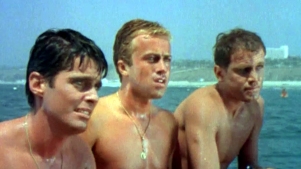 Duke: Fellows I’m telling you the next time we come down here we’ve got to bring Rock.

So the wackiness ensues when the boys convince the girls that they know The Beatles and they will come down and play for their show.   The interesting thing is this is a movie where everyone talks about The Beatles for nearly an hour; meanwhile the Beach Boys and Leslie Gore are just floating in the background waiting to do their next number.  Leslie’s songs “Leave Me Alone” and “It’s Got to Be You” are the highlights of the movie.    Along with The Beach Boys singing “Little Honda” at the top of their custom car sound.

As an added treat is Linda Saunders, Bobbie Jo  on ‘Petticoat Junction’ as the girl who really lets go when she hears bump and grind, belly dancing music.

Overall, THE GIRLS ON THE BEACH is not great, and it’s really not even good.  But it does have a few camp moments and a couple of good musical numbers.  However, it is so square and most of the characters are a drag that it seemed way longer than its 80-minute running time. 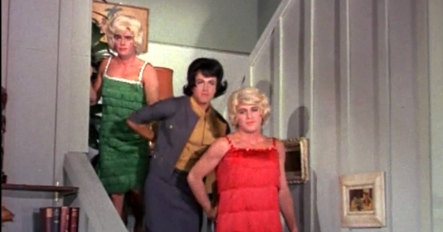 Spoiler Alert:  Guess what?…The Beatles aren’t in this movie… They were too busy being famous and changing music history.   And The poor Beach Boys they aren’t even mentioned in the trailer!  But the Crickets are!