PRESIDENT GROVER CLEVELAND made Labor Day a national holiday in 1894, with the intention of preventing further worker turmoil and deaths, such as occurred during the just-ended, nationwide Pullman strike. Now, it’s a great time to gather together and relax with friends & family for food, drinks, and… movies. Celebrate worker esprit de corps with some Labor Day spirit and one or two of these recommendations (in no particular order), all of which in some way highlight both the delights, and plights, of working men and women. 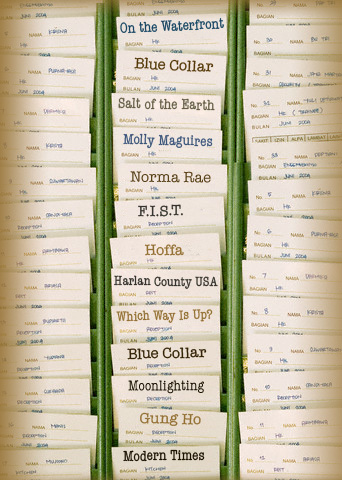 ON THE WATERFRONT (1954; directed by Elia Kazan) Ex-boxer and longshoreman Marlon Brando attempts to redeem himself by confronting union boss Lee J. Cobb. Leonard Bernstein’s first movie score. “One of the most powerful films of the 50s” (Pauline Kael).

SALT OF THE EARTH (1953) Latino mine workers on strike in New Mexico. The film’s writer and producer had been on the Hollywood blacklist.

BLUE COLLAR (1978; Richard Pryor, Harvey Keitel) Auto workers are being cheated by both their management and their unions. “Strongly-written and provocative” (Danny Peary).

MODERN TIMES (1936) Charlie Chaplin vs. the Machines. An assembly line worker tries to express his humanity at work, with the help of Paulette Goddard.

MOONLIGHTING (1982) Jeremy Irons is a Warsaw construction worker ordered to London where he slowly begins to oppress the Polish laborers he’s supervising.

BLACK FURY (1935) Michael Curtiz’ film is based on a true story of a Pennsylvania coal miner (Paul Muni) who was beaten to death by  company detectives. “Realistic, strikingly filmed” (Leonard Maltin).

GUNG HO (1985; directed by Ron Howard) Michael Keaton stars in this light comedy about a Japanese auto firm’s attempts to establish a factory in the U.S.

WHICH WAY IS UP? (1977) Richard Pryor plays three roles in a story of a citrus grove worker transformed into a union hero. A remake of the Lena Wertmuller film, THE SEDUCTION OF MIMI.

HARLAN COUNTY, U.S.A. Oscar-winning Barbara Kopple film documents a bitter strike by United Mine Workers against a Kentucky power company. “One of the most incisive portraits of America and the ever struggling labor movement” (Danny Peary).