The movie The Skeptic movie got horrible, terrible reviews when it was released.

You know you’re in trouble when the most appealing element your film is Tom Arnold. – PopMatters 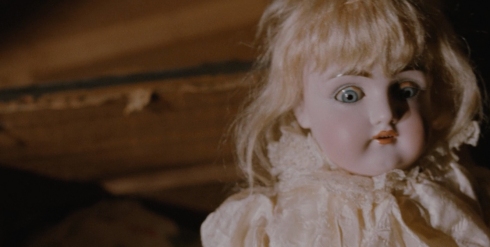 I think the problem is that they didn’t watch this movie alone with all the lights off in an apartment that has had its share of weird bumps in the night.

Tim Daly plays a guy whose estranged aunt dies and leaves him her house, where he deceides to spend a couple weeks to get away from his clingy wife who wants to see him cry.  (Side note: Tim Daly is best known for being the voice of Superman in the latest animated version.  His voice is so handsome, it made it a little hard to concentrate on the character.)

The creepiness starts right away as he hears whispers, sees images of a strange woman and hears the sound of someone falling down a flight of stairs.   The film reminded me a lot of The Haunting,  except The Haunting’s main character wasn’t a total prick who has a great wine celler.  Like The Haunting the house is the main character.

Overall, I found The Skeptic completely engaging and really don’t know why there were so many horrible reviews against it… It has an 8% on the Rotten Tomatoes site.  That’s only slightly above the Larry The Cable Guy movie.  Even the user reviewers panned it and really hated the ending… not to give it away but I found it actually scary and touching.   So go figure… don’t watching this with anyone because you probably are going to be mocked for your choices… just chalk this up to a guilty, ghosty pleasure.