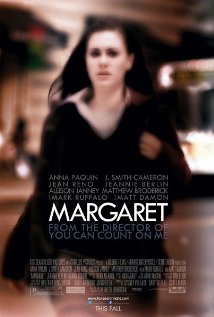 “It is the blight man was born for
It is Margaret you mourn for.”

FILMED nearly six years ago by director (YOU CAN COUNT ON ME) and writer (GANGS OF NEW YORK, ANALYZE THIS, ANALYZE THAT) Kenneth Lonergan, MARGARET has only very recently been made available. Its troubled history reportedly is due to “editing problems”. It shows. Truly a mixed bag (emphasis on “mixed”) it is nevertheless worth your time if you’re open to something a little different and, at times, a bit confusing.

Lisa (Anna Paquin) is a young, bright (and just a little irritating) woman in her late teens. She lives on Manhattan’s Upper West Side with her stage actor, single mom (J. Smith Cameron) and a young brother.

Manhattan could almost be said to be a co-star in this film, similar to Woody Allen’s by the same name. MARGARET opens with some slow-motion shots of New Yorkers going about their day, just as we see Lisa doing. A young, shy fellow, from the private school she’s attending, awkwardly asks Lisa for a date. (“Are you, um, asking me… out?”, Lisa says, after several, funny attempts at clarification.)

This is the start of a theme that is present throughout MARGARET: little or no communication between characters. The most notable example being what immediately follows: a very heartbreaking and realistically portrayed accident involving a bus and a pedestrian. Which happens as a result of Lisa distracting the bus driver, Maretti (Mark Ruffalo (THE KIDS ARE ALL RIGHT), with her questions about his hat.

Within the movie’s first few minutes, we’ve already had three or four instances of miscommunication. Many more ensue, not the least of which is between director/writer and the audience.

The movie starts out well enough. In fact, it’s riveting during its first hour, as Lisa is shaken to her core by the tragedy and her decision to lie to authorities about Maretti’s responsibility for the accident. As the story progresses, Lisa becomes angry, regretful and resentful. She gets extremely moody, ornery, and combative, with her teachers (Matthew Broderick and Matt Damon, among two others) and the other private school students, but particularly with her mother, Joan.

Joan has emotional troubles of her own, as is evident after she meets, and begins to date, the dashing, debonair and very smitten Ramon (Jean Reno). Joan appears only mildly interested and, in fact, really seems to be using Ramon to fill her physical needs.

Lisa, meanwhile, confronts Maretti and his wife at their home, challenging him to admit to the police he went through a red light. Lisa also confronts police detectives, has a ferocious, very well-acted verbal battle with her mom, and, by her own request, loses her virginity.

When Lisa’s persuasions to Maretti don’t work, she enlists the help of the victim’s relative, Emily, played outstandingly and hilariously by Jeannie Berlin (daughter of Elaine May). Emily, in a heated argument with Lisa, will stand for none of her guff. “This isn’t an opera! And we are not all supporting characters to the drama of your amazing life!”. Emily introduces her to one lawyer, and then another. Legal wrangling (too much of it) is interspersed with Emily’s quips and sarcastic attitude, and they really lighten and brighten this picture which, by now, has begun to sag under its own weight.

A totally incongruous encounter between Lisa, her teacher (Damon) and his girlfriend near the movie’s end had me baffled; it appears likely that this could be a result of the film’s alleged “editing troubles”.

There are other, more tightly-knitted movies of this type–movies that have many characters, overlapping stories, and changes in tone. Some examples are SHORT CUTS, MAGNOLIA, and GRAND CANYON–all of which have surprises in them but flow smoothly and logically.  MARGARET feels like a rough cut. It’s unorganized and long (2-1/2 hours*) with several dead end sequences and needless plot tangents. It could easily do without 30 minutes. It’s hard, for example, to figure out why there should be two lawyers (one’s purpose seems to be only to introduce the other), and four teachers, for instance.

Still, even with these flaws, some major, this movie is recommended. Paquin, Smith-Cameron, Ruffalo and Berlin are terrific–not a false note between them. It’s fun to see Reno, Broderick and Damon, although their parts are small and don’t pack nearly the same degrees of emotion. And then there are the panning shots of the city. Even if they were added to help patch over the editing miscues, they give MARGARET a little bit of the cohesion that it needs.

MARGARET is widely available on DVD, Blu-Ray (*with an even longer, three-hour “director’s cut) and streaming services such as iTunes