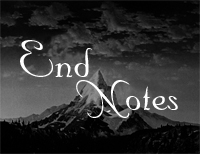 Occasionally, I will be writing something I’ve dubbed “End Notes”–a very short blurb about, well, the ending of a particular movie. It’ll usually be a favorite ending, from a movie that to me has a perfect ending. Or maybe a movie I never wanted to see end. So, it goes without saying, that–even though you’ve probably seen the movie–I need to issue a Spoiler Alert. And I just did.

RECENTLY, I was fortunate to be at a Chicago Symphony Orchestra performance at which Anton Karas’ famous and unique Third Man Theme was played. A zither player was not easy for the CSO to find, so the conductor said. They searched high and low, finally locating one in… Milwaukee. He was an unassuming fellow, greeted with huge applause. Symphony Center became quiet, and then we heard the familiar opening notes.

Karas’ music gives this amazingly atmospheric movie–personally one of my all-time favorites– a melancholy, wistful tone nearly throughout. Occasionally the tune segues into a jaunty sort of rhythm, which matches Harry Lime (Orson Welles) as he goes on his merry, postwar way through the dark ruins of Vienna. But his bounciness and that of the music only emphasizes the sadness that pervades the other parts of the score, and the tragic events that ensue. We know Lime is whistling in the dark. He is doomed.

We come to the movie’s final scene. Holly Martins (Joseph Cotten) has had to reluctantly acknowledge, thanks to Major Calloway (the great Trevor Howard), that the greed and callousness of his old friend Harry has led to the deaths of many children. Since arriving in Vienna, Holly has had a romantic interest in Harry’s beautiful, sultry girlfriend, Anna (Alida Valli), but it’s obvious to everyone (except Holly) that she does not feel the same. He tries, unsuccessfully, to convince Anna of Lime’s guilt. But Anna’s heart remains with Harry. She feels Holly has betrayed both herself and Harry, and she will not forgive.

Coming full circle since the film’s beginning, we’re back at the cemetery, once again saying good bye to Harry Lime. It’s a grim and chilly fall afternoon. The funeral service has ended. Saddened friends are departing, going their separate ways.

Holly leans non-chalantly against a wooden horse cart, like one of the wagons in his cheap, Zane Grey-like novels. He strikes a pose like a Western cowboy as he awaits the approach of the grieving, disillusioned Anna. Surely she will stop and we will talk, Martins might be thinking. Calloway glances back, his expression saying, The fool will never learn.

Holly looks down the lane, towards the approaching figure. Dry leaves fall from barren trees, like tears. Anna draws nearer. Then, without a pause or acknowledgment, Anna passes Holly by…

Holly reaches for a cigarette, lights it, and tosses the match. Harry is gone. Anna has left. One can’t just leave.

Martins: Wait a minute. Let me out.
Calloway: Well, there’s not much time.
Martins: One can’t just… leave. Please.
Calloway: Be sensible, Martins.
Martins: Haven’t got a sensible name, Calloway.

(THE THIRD MAN is widely available via streaming or disk, including Blu-Ray editions