The Best Double Feature Night EVER!

One of the best film group nights I had was several years ago when I first got my projection system. The odd thing about showing movies to large groups is that you have to hit a middle ground that everyone can somehow relate too. I’ve had movie nights where I’d shown classic movies that are on the AFC Best Movies Lists and they were received with just tepid responses.  Recently, at an outdoor movie night I showed The Thin Man.  A movie that I’d not seen recently, but remembered liking at a revival showing.  It wasn’t a total bomb, but by the middle of the film people were restless, constantly getting up to change seats,  getting drinks, a ten-year old gave up half way through to go to sleep in the house, and another attendee told me afterwards, “You know, no matter how many times I see that movie I’ve no idea what the hell is going on…”

This was not the case with my double feature of The Night of Lepus and The Thing With Two Heads. 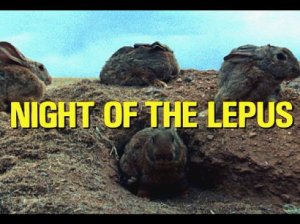 The Night of the Lepus was an early 70’s MGM Horror movie starring Janet Leigh and Stewart Whitman.  Remember the horror of the giant bug movies of the 50’s, such as Them or Tarantula?  Now think of one of those movies, except with bunnies!

Director William F. Claxton was mainly a television director, so maybe that’s why this film has the feel of a TV movie. It’s quick and snappy and totally ridiculous.

The 2nd feature of the evening, The Thing With Two Heads is a what my mother would have called ‘a hoot’.

Directed by one of the most talented exploitation cinema directors, Lee Front,  The Thing with Two Heads has Oscar-winning actor Ray Milland as a bigoted millionaire who has his head grafted on the body of a death row inmate played by NFL star Rosie Grier.   This movie is what I like to call a camptacular.  It has everything; 70’s blaxploitation meets Sci-Fi, over the top acting by Milland, and a message of why-can’t-we-all-get-along.   The film rolls like a runaway train that has jumped the tracks.  It really isn’t going anywhere, but you can’t take your eyes off of it because you want to see the crash.    And it’s extremely fun!

So the next time you are having a movie night and trying to decide between How Green Was My Valley and The Maltese Falcon, why not try these instead?